Concept of Qi and Xue

In Traditional Chinese Medicine, the Blood stasis and the stagnancy of Qi are the cores of all orthopedic diseases.  Therefore, the dysfunction of the movement of Qi and Blood can lead to the production of pathological changes of Blood stagnation, stasis, and the occurrence of various orthopedic diseases.

In Chinese culture, Qi is an active principle part of any living thing. It is frequently translated as “life force or energy flow”. Symptoms of various illnesses are often believed to be resulted from the disrupted, blocked, or unbalanced Qi movement through the body's meridians, as well as deficiencies or imblances of Qi in various Zang Fu organs. TCM practitioner often seeks to relieve these imbalances by using variety of therapeutic techniques, such as acupuncture and moxibustion to clear blockages and restore Qi balance.

There are two typies of Qi within our body:

(1) the Congenital Qi that we are born with -

The Main Fundtions of Qi Within the Body are: 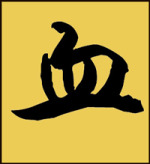 The concept of Xue (Blood) used in Traditional Chinese Medicine (TCM) consists a host of different meanings, actions and effects than the term is commonly understood in western medicine. In Chinese medicine, the Blood is a dense form of body fluids that have been acted on and energized by Qi. The Blood flows both within the blood vessels as well as within the meridians.

The Blood forms in the body through two separate cycles - (1) the pre-heaven cycle to use Congenital Qi and the Kidneys to produce marrow which produces Blood, (2) the post-heaven cycle to use foods and fluids (aquired Qi) to form Blood. The Blood circulated by the Heart and stored by the Liver.

The Blood are to moisten and to nourish the organs, bones, muscles, tendons and skin. The Blood works synergistically with Qi to provide the foundation for mental activities.

in network with most major insurance companies